Bert is a very simple web-based download manager written in NodeJS and some client Javascript, CSS and HTML. You can get it directly from my GitHub page here. It runs on one of my various Pis and downloads files all the day (if I want) silent in his niche near to the router.

Check it out - it’s a really nice project and worth it! 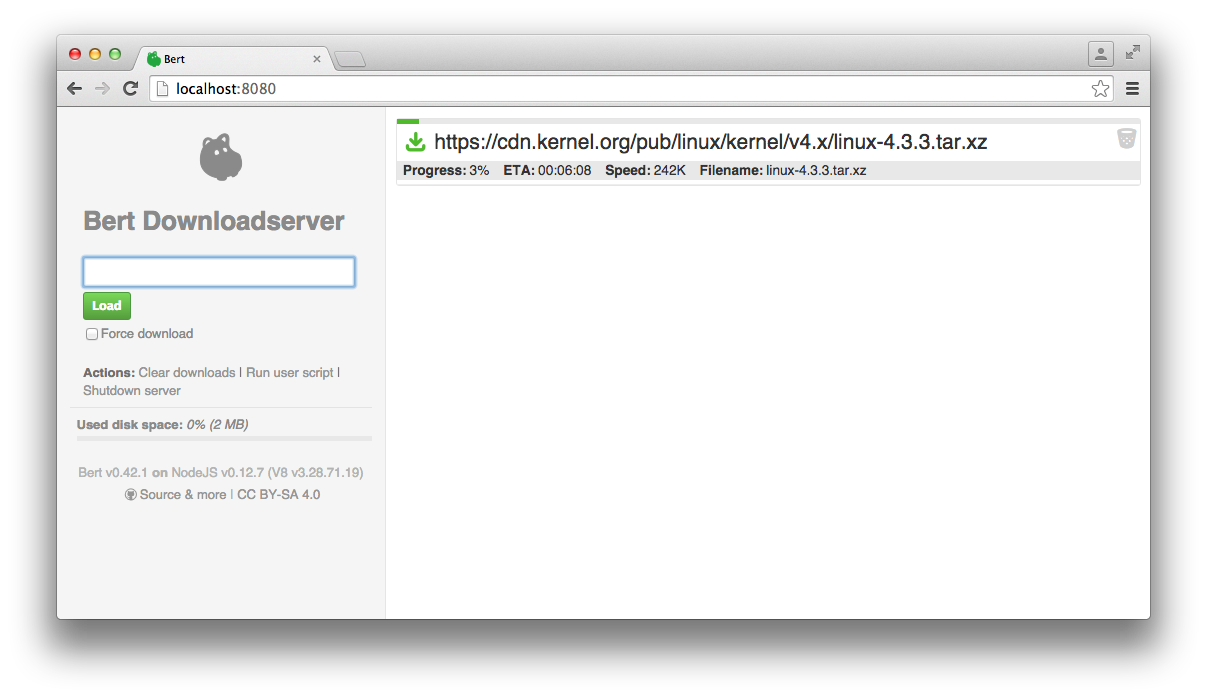 A screenshot of the initial version of Bert download manager.

I often need to download large files from the internet like Linux images or a lot other stuff. Since my internet connection isn’t that great at all I decided to look for a simple download manager. Unfortunately I couldn’t find any suitable one for the Pi which provides a simple (!) web-interface to provide a URL and let it download in a queue setting. The last point is really important since my internet connection is not good enough for handling multiple file downloads.

A look into the history

This happened back in october 2012. Since the Pi was a really new thing I decided to get one and dedicate it to download files. Since there was no suitable software out there I created a really dirty PHP script which uses the system function quite often to invoke bash scripts and wget to download things.

In August 2015 I decided that my solution works so nice (despite the fact that its a dirty PHP hack) and is so simple that I really should spend an other X hours to make it nicer and publish it so that other people could use it if they need a simple download manager for the Pi - it works certainly on all other Linux systems and on Mac OS X.

One interesting thing you can see here is that I used the dirty hack for around three years. And that’s a behaviour I often see in (big) business: if there is a system the people stick to it and this is not at all motivated by costs of migration to a new system. People get used to a certain behaviour and familiarize with it. Even if there are bugs they create little workarounds and live with it - just like me. And this is a really nice oberservation.

So Javascript was one of the first programming languages I get used to back in - I think - 2005 and I really like it because of it’s functional touch and clear structure and freedom (and obviously since I’m a Java guy). So when I heared about NodeJS I really wanted to try it and use it for a little project. So I thought: why not create a re-spin of my download manager and do it with NodeJS?

And I did it and it turned out really nice. I even compiled it on the Raspberry Pi with some trouble which you can read about here.

As you might guess there might be no huge future development besides bug fixing since I don’t know if somebody is interested in this project and for me it fits my needs so no need to invest a huge amount of further work into it (yet). It fulfils its purpose quite good since I’m using it the last couple of days now and it gives me all features that I need.

If I really have spare time I might consider the following points:

Since the initial release of Bert I'm using Bert constantly multiple times a week or sometimes even daily and it works really great besides some irks and quirks. If I have any time in the future I might modify it to allow pasting multiple download links at once or polish up the UI a little bit.